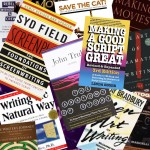 A Glut of Knowledge

When screenwriting books became popular in the 1980’s, I was ready for them. Here is a recollection.

I started with Syd Field’s Screenplay, which I read cover to cover twice. He taught that a story has a predictable structure based on three acts. In that first edition, he even made a big deal about act reversals happening on particular page numbers. The page-number thing put me off a little.

I went from Syd Field to John Truby’s Anatomy of Story seminars and absorbed his teaching for two years. He explained the components of story, imagery, and genre with examples throughout storytelling history, and did it as well as any teacher I found. He also reduced movie structure to 22 “building blocks”. When he criticized one of Shakespeare’s plays for not conforming to his 22 steps, I felt caught between feeling sorry for Shakespeare, or for the 22 building blocks. [1. That was years ago. He may regret the statement. Or, he may be right. Shakespeare made mistakes. Perhaps this footnote can serve as a call to forum.]

When Christopher Vogler’s book The Writer’s Journey came out in the late 90’s, I devoted a month to it. He boiled down “The Hero’s Journey” to twelve stages that correspond impressively with all sorts of great stories, ancient and modern. “Mythic Structure” has had a huge influence on movies, for better and worse.

By the time Blake Snyder’s Save the Cat came out in 2005, I had been studying story for 25 years and had grown sick of theory so I only nibbled. The title refers to the fact that audiences like a character who saves a cat, though sometimes kicking a cat works well enough, depending on the character and depending on the cat. SAVE THE CAT is so popular that critics claim it is ruining the world. Whether it is or not, Blake Snyder’s fifteen “story beats” have permeated the world.

These teachers have critics who don’t approve their templates, or even the fact that they propose templates. But the proposals have been accepted. Throngs of eager students submit to them, and I think I know why from my own experience….

In college, I gave my full attention and trust to a Creative Writing class. We were taught to “write what you feel”. No matter how badly we wrote, we received applause on the presumption that we “felt it”, and I think everyone got an A. I wasn’t happy with my A. I was frustrated. After a few years of teachers who left me to myself to figure out how to craft a story, I longed for directions.

The template-making teachers offered directions. They proposed recipes. The recipes didn’t work that well for me, but I began learning.

I learned that a story has form, and that form exists to satisfy an audience. I learned that various cooks have various recipes. Studying multiple recipes allowed me to compare them to each other and to my favorite stories, and got me familiar with the ingredients.

But it took too long. I spent ten years immersed in theory that came from at least forty books. I would have done better with fewer than ten, perhaps three or four. I haven’t even mentioned the teachings of Linda Seger and Michael Hauge, or Robert McKee for whom I will write a separate entry. There are now so many teachers of story that you can spend your life studying stories without creating any.

If you want to learn how to tell stories, you can do it without books or teachers. You can even excel. But it’s not typical. Teachers can help you. They can introduce you to methods for coming up with ideas and how to assemble them. They can clarify ingredients and point them out in great works to inspire you.

And yet, I am sure that the best way to learn how to tell stories is not from books or teachers. It is how people have learned certain skills since long before books were invented, and before anyone made a living teaching. “The Natural Way to Learn” will be my final entry in this series.

But first, let’s look at the benefits and hazards of using a template to tell a story.